Bruce A. Waite was a man among men. He stood strong in integrity in every aspect of his life. 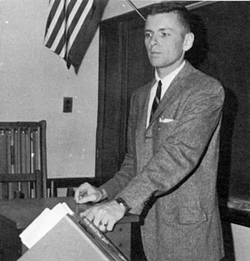 As an educator, Mr. Waite focused diligently on his students, and their opportunities to learn. He taught English (Advanced Comp, Great Books, Practical Reading and Writing) from 1959-1989, and served as National Honor Society advisor. He believed in the structure of the language and the practice of speaking and writing well. Many college professors remarked that they knew when freshmen students had completed classes with Mr. Waite because of their command of the English language.

He did much more than simply teach - he imparted knowledge. He did not measure success by simply marking grades in a grade book, but by exacting a change in the lives of his students. And in keeping with his altruistic nature, Mr. Waite measured his success second to the successes of his students. His students were so important to him that he never forgot a name, even of those students from earlier years of teaching.

He was a mentor for his students and his colleagues, and continually set the example of humility. He was a well-respected man and he lived his life with impact, although his humility never allowed him to understand the magnitude of his sacrifices for others.

Bruce was an avid runner, never missing a day in over 33 years. Tendonitis (which required him to walk with crutches, and he put aside to run), illnesses, and severe weather did not stop his determination. He kept a running journal, in which he logged over 76,000 miles in numerous states. Nothing stopped him when he ran – the only time his step ever wavered was his encounter with a moose on the path while running in Wyoming. He ran as catharsis, and he did so with ease and freedom.

In 2002, his breathing became more labored and a series of appointments and surgeries led to the diagnosis of mesothelioma – a cancer caused by asbestos exposure. His wife Nancy and daughter Jill by his side, Bruce's runs became walks, and then his walks became just the effort to breathe. His commitment to running was his greatest weapon against the mesothelioma, and as he did in every aspect of his life, Bruce Waite faced his illness with determination, but the insidious effects of this ravaging disease had been forming in his body for 30-40 years.

In one of his last conversations with his daughter, Bruce asked that she and Nancy consider implementing a scholarship for students going into education, a dream of his of which he spoke often. The Bruce A. Waite Scholarship has assisted students from area schools follow their own dreams, as he wished.

Bruce Waite took his final breath on March 25, 2003, but his legacy continues on – through the scholarship, and now through this 5K, done in his name and honor, money will be given to further research into treatment and cure for mesothelioma. If Bruce's legacy can assist one family to not endure what his did, then his suffering was not in vain. On his chalkboard were written his own words by which he lived, and a challenge to us all:

The road to mediocrity is heavily traveled;
the path to excellence, seldom traversed.